Recognizing the Symptoms of Prostate Cancer in Time!

What are the possible prostate cancer symptoms? 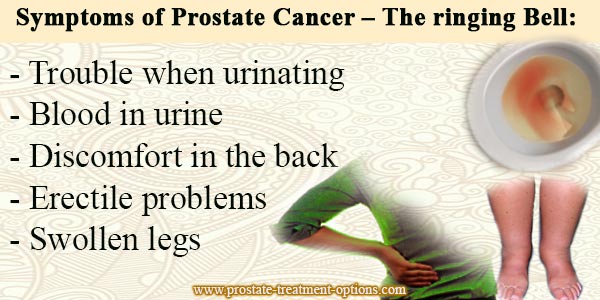 If you are a male and approaching 4rd decade of your life probably this information will attract your interest that with the increasing age, males are getting more prone to prostate cancer and unfortunately it is the second leading cause of death globally, if not taken care in time.

The more dangerous news is that it progresses silently at the initial stage and after becoming full blown, patient gets the deadly touch of it.

Prostate cancer in most of the cases, presents it self as overlapping symptoms of other disease such as pain and inflammation of prostate or presence of some renal stone or calculi.

The pain some times is present during urination, blood may be there with urine but some time as stated it starts devouring silently.

Naturally another question is lurking in your mind:

Which is the "ringing bell" symptom of a possible malign onset?

The only symptoms you may recognize involve the early signs. They occur due to the compression of prostate tumor to your bladder. This leads to urinary tract infection and some difficulties you may experience during the urination.

So, the problems you may face are:

It is estimated that in 5 percent of the cases, men do face urinary difficulties as first prostate cancer symptoms.

With the passing of time, when cancer is totally set, the symptoms are more related to where the cancer is spread. If you notice any unusual blood in urine or blood in your semen, you must go to a doctor. These are due to what cancer can do in your prostate or in the area around the prostate.

Then, depending on where the cancer is spread, you may notice:

Meanwhile in advanced stage, the symptoms include:

How to recognize the symptoms of prostate cancer in time?

Its true existence can only be confirmed after biopsy. But initially doctors avoid recommending biopsy since there is another danger of spreading the disease unnecessarily.

Rather, they prefer to prescribe an antibiotic course and it is when that fails to cure the symptoms, the biopsy of the localized tissue is performed.

Prostate cancer may be a secondary feature of bone cancer and in many times, goes hand in hand with bone metastases and what is more surprising is that this progression may be silent.

Similar thing is observed in case of spinal cord compression and the silent presence of prostate cancer.

Some time patient may come with prostate pain or some other urinary problem and that may trigger the existence during routine examination.

Digital Rectal examination is an effective method to trace the presence of cancer.

The prostrate gland is divided in lobular structure that is smooth in normal condition but if there is presence of cancer tissue, it gives a feeling of rough surface with presence of nodules and strongly indicates the suspicion.

In advanced case, there is abnormal infiltration of lymph nodes from scrotum in the region and distortion of the seminal vesicle that further reconfirms the diagnosis.

Once DRE is done the second step is to see the prostate specific antigen level (PSA) as the elevated serum level many times a bio-marker for carcinogenicity.

If the outcome of prostate cancer is such dangerous that it occupies the second leading cause of death in adult male population your next question should be ‘how to recognize it in time?’

A routine examination at least on yearly basis should be mandatory. Whenever you are faced with some recurrent problem of urine retention, or bowel obstruction or some abnormal sensation related fecal or urine it is better to consult with an expert to know where you stand actually.

Most probably, all these might be symptoms of prostate cancer, although you may not know.

Even in positive cases, sometime conservative management with some medicines may delay the symptoms for more than 10 years and patient can lead a happy life.

Since the causative factor of prostate is unknown you should keep away from the aggravating factors such as smoking and alcohol abuse.

Try to stick to hygienic sex life and avoid multi sex partner to avoid sexually transmitted infections and following up of the expert’s guide line to avoid this killer disease.