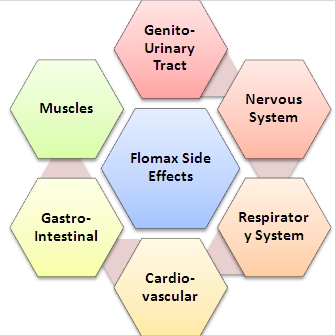 Flomax Side Effects - Make it work

Flomax is one of the many drugs used for treatment of enlarged prostate. It is also known with its generic name of Tamsulosin. Most of the patients who take the drug are over 60 years old.

Its mechanism of action is responsible for some of the flomax side effects drug. It is quite useful medicine when it comes to alleviate enlarged prostate symptoms.

According to the studies carried out to examine this side effect of Flomax, it was concluded that these symptoms were related to the dose; the higher the dose, the more common the ejaculation problems.

As 8% of the patients had experienced reduced ejaculation volume, this is to regret it because, unfortunately, this could affect the conceiving process.

Some of the flomax side effects come from the cardio-vascular system. There are several reports for:

- Orthostatic hypotension - this is a situation when you stand up from the bed or from the chair your blood pressure drops rapidly. This is a complication experienced by 0.2% of the patients.

- Syncope - loss of consciousness, experienced by less than 0.2%. This complication is the reason why doctors must advise patients to avoid any risky situations, where injuries are possible.

Some of the most common complications coming from the gastrointestinal tract are:

2. Nausea - 3% of the patients experience this complication.

3. Other gastrointestinal side effects include: constipation, dysphagia (the patients are not able to swallow the food), gastric pain and anorexia are pretty rare and no statistical data has been collected upon them.

Problems coming from the muscles

Some patients complain about problem coming from their muscles. These problems include back pain and chest pain, reported from about 4% to 8% of the patients.

So, at the end, keep an eye to the possible side effects you might experience. Although beneficial, drugs alone cannot do all the work. Your changes in lifestyle and diet regime together with the use of herbs can help you ease the problems of prostate.