Herbal Therapy for the Enlarged Prostate

Get to know the herbs, their benefits and how to use them through scientific evidence.

In Europe and recently in United States, herbal treatment of enlarged prostate is used more commonly than the chemical medications. The efficiency of some of these herbal treatments have been tested and proved clinically in several studies.

But, it is very important for you to understand that the complete improvement of treating enlarged prostate naturally can be only experienced after the period of 2-3 months from starting herbal treatment.

Unfortunately, it is a fact that benign prostatic hyperplasia (enlarged prostate) usually affects more than fifty percent of men above the age of fifty five years old. Scientists believe that hormonal changes accompanying ageing might be the prime suspect for enlarged prostate in elderly.

The Nature we live in is very rich with regards to the myriad choices of curative herbs. 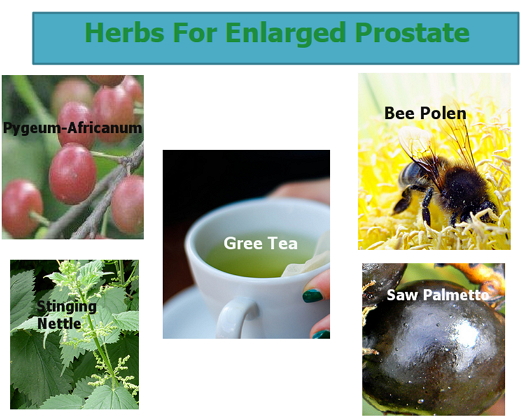 Saw palmetto (also known as serenoa repens or sabal serrulata) is one of the most researched herbs used to treat enlarged prostate. It is prescribed frequently in France and Germany.

Saw palmetto is a native plant which grows naturally in the southeast of U.S.A.. In fact, Florida is the main producer of this herb. Saw palmetto has been proved to prevent the action of 5-alpha reductase enzyme (responsible for converting testosterone into more potent form dihydrotestosterone).

Besides, this herb hinders the influence of some growth factors plus other inflammatory substances which cause common symptoms of BPH including urgency, incomplete emptying, urinary retention, nocturia, long voiding and dribbling.

Generally, regular taking of saw palmetto can reduce the size of enlarged prostate. Almost 85% of BPH sufferers show an improvement of their symptoms after using saw palmetto.

To date, the National center for biotechnology information has published a study conducted by the Scientific Research Institute of Urology in Moscow, Russia.This prolonged study involved 150 men, diagnosed with benign prostatic hyperplasia and suffering from enlarged prostate symptoms.

At the end of the study, it was documented the long term effectiveness and acceptability of Permixon (this is a product of regular saw palmetto extract oil, used popularly in Europe).

With regards to the recommendations, according to the current study, it was emphasized the  use of saw palmetto as a first line of medical treatment of enlarged prostate symptomatically non-complicated.

Pygeum africanum (Prunus africanum) is another useful herb to treat enlarged prostate. This is an evergreen tree usually found in southern and central areas of Africa.

Pygeum africanum bark extract has been found to treat some of urination complaints associated with enlarged prostate. Myriad human researches have reported that pygeum can markedly treat urinary hesitancy, frequent urination, nocturia as well as painful urination for individuals who show mild to moderate symptoms of BPH.

At the end of the day, the size of prostate of the participants was reported to be reduceds together with the enhancementof the urinary flow and bladder emptying senstations