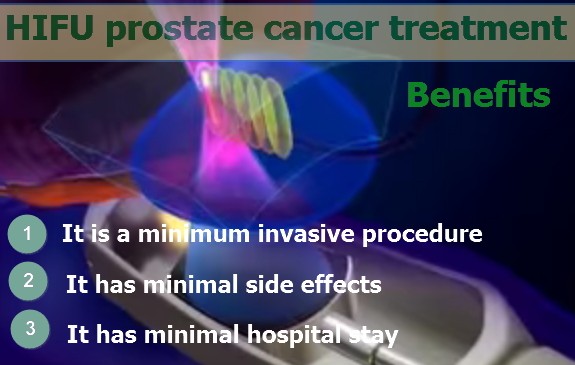 HIFU is the acronym of high-intensity focused ultrasound. It is a non-invasive technique that uses heat to destroy the areas of prostate gland affected with cancer.

It uses a probe to beam high-intensity sound waves in cancerous tissues, and by doing so, the tissues heat up and die soon after.

It is a technique that can be used in the following conditions:

1.     If one has low-grade prostate cancer-this means that cancer is not spread outside the prostate gland.

2.     If one, after using radiotherapy, has still prostate cancer- it is called salvage HIFU

What is the procedure about?

The procedure involving HIFU prostate cancer treatment is based on the fact that if you heat up the body tissues above a certain temperature, those tissues will die.

The way HIFU operates is: beams of high-intensity sound waves that are generated through a probe are concentrated in the area of the prostate affected with cancer.

The heated-up cancerous tissue will die and thus, the cancer will be destroyed.

Given that the prostate gland is deep within the pelvis, this result can be achieved by using a transrectal probe.

This means, that the probe is being put into the rectum and from this position it can beam sound waves accurately to the prostate.

What are the benefits of HIFU prostate cancer treatment?

Benefits of using HIFU in the treatment of prostate cancers are:

1.    It is a minimum invasive procedure- this means that there are no incisions made, and the damage on other organs is minimal. Also, the recuperation time is minimal.

2.    It has minimal side effects- it has fewer risks than surgery, and it can be suitable for men with other health problems. Also, given that the ultrasounds (unlike radiotherapy-waves) are harmless to body tissues, the procedure can be repeated without the possibility of damaging the tissues.

3.    It has minimal hospital stay- the patient is discharged from the hospital in less than 24 hours.

What about side effects of HIFU prostate cancer treatment?

The side effects of HIFU procedure are as following :

1.    Scarring of the prostate- scarring is a result of the intense heat and of the dead cancerous cells of prostate

3.    Lack of enough data- being a new procedure in the treatment of prostate cancers, there is not much data to calculate the long-term effects from it.